I’ve reached the middle section of my YA novel.  As a writer, I’m a pantser, meaning I write by the seat of my pants. I love writing this way. Never knowing what will happen next and then being delighted when I find out.

That worked fine for the first section, because beginnings are exciting and new and fresh.

But a novel is for the long haul, and the middle section is the biggest part, and it was starting to feel arduous and unending.  So I went to the internet for help. Here’s what I found out.

I need to think more about structure and pacing and plot lines, because without some set guidelines, I’ll run in circles and never get to the end.

Instead of a novel in thirds. Split the middle section into two parts and have a four part novel. I like this idea. It makes the middle seem more manageable. I found this idea at Terrible Minds.  The writer somehow ties faking an orgasm to fiction writing. Worth a read just for that.

Stories are about problems that need to be solved. In the middle part, the hero must face some tests. He might even need to face his greatest fear.

Every scene should keep the story moving forward. Every chapter should start with a compelling inciting incident. A problem arises. Something throws the main character for a loop. Keeps him constantly thrown off kilter. This article has more good info on inciting incidents.

Look for places where the protagonist is forced to abandon his original plan and move in a new direction to meet an added challenge.

I could bring in a new character. That always adds spice and variety.

In certain parts, I could ramp up the action and force the pace to quicken.

It’s always nice to add some comic relief here and there to allow a break in the action and low points.

And lastly, when I get stuck. I can do some character prompting. I’ll put the character’s full name at the top of the page. Then start a dialogue.  I’ll ask Teddy about the situation he’s in. What does he feel about it? Ask him how he thinks he’ll solve his current problem? And hope that he gives me some really good answers!

(The above photo is Tootsie’s Orchid Lounge in Nashville where a major scene in my novel takes place.)

Also: writing update. I got my first rejection on a short story. I’ll just send it out again for the year of submission!! 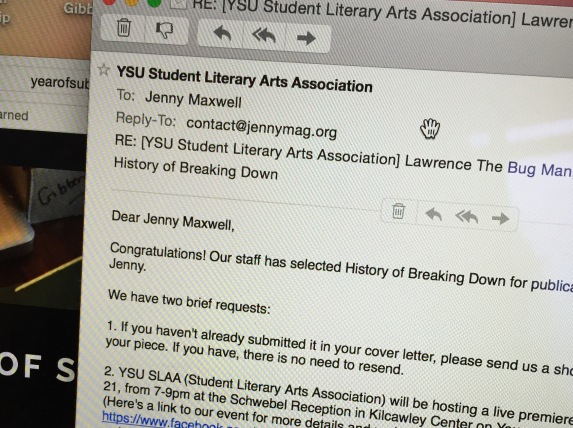 “Face it, Aunt Jenny. No one’s going to knock on your door and say ‘hey, you got any novels in there we can publish.'”

This is what my niece Coral had to say to me a few summers ago. She was 10 at the time. She’s an avid reader, and I’d hired her to read a novel I was working on and give me some notes. She did and also suggested that I send it to a publisher. A fan of the Warriors books, she’d said, “I think HarperCollins would like this.” I explained it isn’t that easy.

That’s when she gave me her brilliant little response. I’ve been repeating it to myself ever since.

“No one’s going to knock on your door….”

I thought about it when I hit the submit button on Super Bowl Sunday, sending off my poems without a bit of expectation that one would be accepted.

And what do you know?

March opened with one of my poems being selected for the April issue of Jenny.

I’m so appreciative. What a great way to get the Year of Submission going. Not rejected but accepted. What a sweet little confidence boost.

One I’ll need, because I’ve been researching where to send a book manuscript. Just reading the submission guidelines makes my heart rate go up and my hands shake, despite trying to adopt a “looking for the help I need” attitude.

To which my niece, now 14, would probably say “Oh, get over it” or text me the emoji equivalent. Because, of course, no one is going to knock on your door…