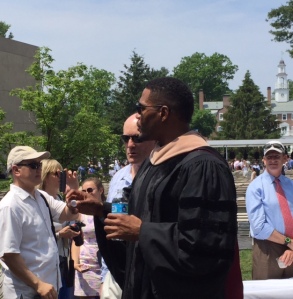 He was addressing the senior class, but much of what he said I needed to hear.

Michael told the senior class, don’t say “If” because “If” breeds self-doubt.

Instead say, “I expect.”

Michael admitted he was scared to be addressing the crowd. But he encouraged everyone to work scared. Play scared. Do whatever scared.

Attitude matters. It’s the only thing we can control.

Take a risk. Try a new thing. Stay open. If someone offers you a job, an opportunity, and it feels right, take it, even if you’re not completely prepared. Then make sure you learn the ropes fast.

So following some of Michael’s advice, here I go.

I now expect all of these pronouncements to come true. 🙂

If you’d like your own pep talk from Michael, try this:

As an aside, I found this article titled “Your Words Matter” and that there’s such a thing as words matter week!