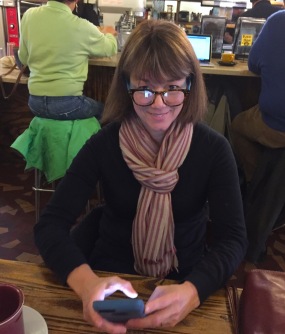 When Caroline felt lost about what to do next with her novel, she called for help. Look closely at the reflection in her glasses. Is that a text from her editor? And if it is, will she follow his advice? The plot thickens…

Matthew Limpede is helping me with my novel. Matthew is the executive editor at Carve Magazine. I initially picked him by his bio on Carve, mainly because I liked the same authors he did. Matthew is insightful, easy-going, direct but not pushy, and most importantly, he has a sense of humor.

He’d read my first novel draft a year ago, and he gave me great feedback about many aspects of the story. The biggest one being that one of my main characters, Luther, needed to go. In my heart, I knew Matthew was right, because I’d carried Luther over from a different novel.

He also wanted me to back up and make a play-by-play of every single scene in the novel, as well as work on each character’s personality, backstory…

For 10 months, I reworked the novel without Luther. I finished the plot. I polished the first half. But plot fragments made up the latter half. I felt lost. I couldn’t see an end in sight. I needed another set of eyes.

I contacted Matthew. He read the new draft. Our first phone call went something like this.

“Did you do ever get around to that outline we spoke about?”

“What about those character sketches?”

“I kind of avoided those too.”

All of which was obvious by my divergent plot twists and extraneous scenes distracting from the forward motion of the novel.

We both decided, before I wrote another word, I needed an outline. But I didn’t have the self-discipline or interest to write one.

So we’ve made a plan. Matthew will compile what I’ve written into an outline. He’s not telling me what to write. He’s not deciding the plot. He is simply the architect building the structure, and I will then keep decorating the rooms.

He will also be a taskmaster. Saying. Here is a scene. You can’t leave this scene until you’ve finished it. Here is the next scene… I’m actually looking forward to being bossed around. Boundaries are beautiful things!